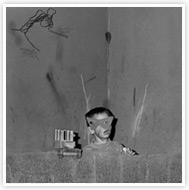 
The Johannesburg-based Roger Ballen Foundation, established by internationally renowned photographer, Roger Ballen, is dedicated to promoting the education of photography in South Africa by developing programmes that further the appreciation and understanding of the photographic medium. It is the first institution of its kind to focus on bringing leading international photographers to South Africa.

Ballen often attributes his own visual literacy to his New York childhood when he was surrounded by many of the great photographers of the day such as Cartier-Bresson, Evans, Kertesz, Steichen, Strand and Arbus. Ballen's mother worked for the photographic Magnum Agency in New York in the 1960s and in the early 1970s opened her own photographic art gallery in the city. This experience made him appreciate the value of being exposed to world renowned photographers and instilled in him the desire to create a similar milieu for the South African artistic community.

In 1982, Ballen settled in South Africa working as a geologist. His work took him to many small towns across South Africa, where Ballen photographed extensively. This provided the material for his book entitled Dorps, Small Towns of South Africa in 1986. Ballen continued with this genre, in focusing specifically on the inhabitants of the small towns. In 1994, Platteland, Images of a Rural South Africa, was published. This series was the first that garnered him international attention, with its images collected and exhibited by leading public and private institutions around the world. This was followed by the award winning book Outland in 2001. In 2005 Ballen published Shadow Chamber. His new series, scheduled to be published by Phaidon in 2009,marks a new juncture in his photographic style.

Over the past few years Ballen has wanted to make a contribution to the development of cultural life in South Africa. This has lead to the establishment of the Roger Ballen Foundation; the focus of which is to bring to South Africa internationally renowned contemporary photographers who will exhibit their work as well as participate in a lecture series. These exhibitions will often be mid-career retrospectives and the lecture series are aimed at expanding the South African awareness on photography.

It is important for Ballen that his Foundation is South African based: the country has been his home for 30 years and it has provided much of the rich content of his images. The potential impact of the Foundation's work on South Africa's artistic community is likely to be substantial. It is Ballen's hope that the Foundation's projects will influence a new generation of photographers, artists, curators, collectors and enthusiasts by enabling them to engage with notable contemporary photographic art that would otherwise not be seen in South Africa.