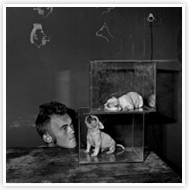 Previously the foundation presented an international photographic showcase consisting of an exhibition of three world-renowned artists: Vik Muniz, Stephen Shore and Janaina Tschäpe. This was a continuation of the Foundation's educational programme that followed Stephen Shore's acclaimed workshop, lectures and exhibition in Cape Town Iziko National Gallery in 2008. It was not only the first time that all three artists exhibited their work in Johannesburg and South Africa but also an opportunity for South African audiences to see some of these artists important and iconic works. The programme also included a seminar and public conversation focusing on an art dialogue and photographic criticism led by professor of History of Art at New York University, Shelly Rice, organised in partnership with Witwatersrand University and the Johannesburg Art Gallery.


The Year of South Africa exhibition at the Godwin Ternbach Museum paired two sets of artwork spanning the past 40 years. The Collection of Violet and Les Payne, a selection of artwork collected by Les Payne, a Pulitzer Prize winning journalist, during his time reporting in Johannesburg, South Africa between 1976-1985, was on display on the first floor of the gallery. On the second floor was contemporary photography by emerging artists who have grown up in the democracy established in South Africa in 1994. By pairing the two groups of artwork, the exhibition highlighted the political and social shifts that have taken place over the last 40 years since the Soweto Uprising in 1976 up through the death of Nelson Mandela last December. The exhibition exemplified the resonance and importance of art and art making as a marker of history and will serve to inform the Queens College community in the history as well as the current situation in South Africa.

An Eye for an Eye


An Eye for an Eye is a nonprofit organization that focuses on correspondence between groups of children from different economic, social, or psychological backgrounds. An Eye for an Eye is taught as a language; it gives the children the opportunity to communicate with each other, although not speaking the same language and not being able to meet together physically. In 2014, Roger Ballen in association with the Roger Ballen Foundation was invited to give a talk to the children from Ivory Park about his photographic work and books as part of this initiative.